Robben Island (Afrikaans: Robbeneiland) is an island in Table Bay, 7.4 kilometres (5 miles west of the coast of Bloubergstrand, north of Cape Town, South Africa. It takes its name from the Dutch word for seals (robben), hence the Dutch/Afrikaans name Robbeneiland, which translates to Seal(s) Island.

In 1654 the settlers of the Dutch Cape Colony placed all their ewes and a few rams on Robben Island, the men built a large shed and a shelter. Since the end of the 17th century, Robben Island has been used for the incarceration of chiefly political prisoners. The Dutch settlers were the first to use Robben Island as a prison. Its first prisoner was probably Autshumato in the mid-17th century. Among its early permanent inhabitants were political leaders imprisoned from other Dutch colonies, including Indonesia, and the leader of the mutiny on the slave ship Meermin.

After the British Royal Navy captured several Dutch East Indiamen at the battle of Saldanha Bay in 1781, a boat rowed out to meet the British warships. On board were the "kings of Ternate and Tidore, and the princes of the respective families". The Dutch had long held them on "Isle Robin", but then had moved them to Saldanha Bay.

In 1806 the Scottish whaler John Murray opened a whaling station at a sheltered bay on the north-eastern shore of the island, which became known as Murray's Bay. It was adjacent to the site of the present-day harbour named Murray's Bay Harbour, which was constructed in 1939–40.  After a failed uprising at Grahamstown in 1819, the fifth of the Xhosa Wars, the British colonial government sentenced African leader Makanda Nxele to life imprisonment on the island.[10] He drowned on the shores of Table Bay after escaping the prison.

From 1961, Robben Island was used by the South African government as a prison for political prisoners and convicted criminals. In 1969 the Moturu Kramat, now a sacred site for Muslim pilgrimage on Robben Island, was built to commemorate Sayed Abdurahman Moturu, the Prince of Madura. Moturu, one of Cape Town's first imams, had been exiled in the mid-1740s to the island. He died there in 1754. Muslim political prisoners would pay homage at the shrine before leaving the island.

The maximum security prison for political prisoners closed in 1991. The medium security prison for criminal prisoners was closed five years later.[16] With the end of apartheid, the island has become a popular tourist destination. It is managed by Robben Island Museum (RIM); which operates the site as a living museum. In 1999 the island was declared a World Heritage Site for its importance to South Africa's political history and development of a democratic society. Every year thousands of visitors take the ferry from the Victoria & Alfred Waterfront in Cape Town for tours of the island and its former prison. Many of the guides are former prisoners. All land on the island is owned by the nation of South Africa, with the exception of the island church. Administratively, Robben Island is a suburb of the City of Cape Town. It is open all year around, weather permitting. 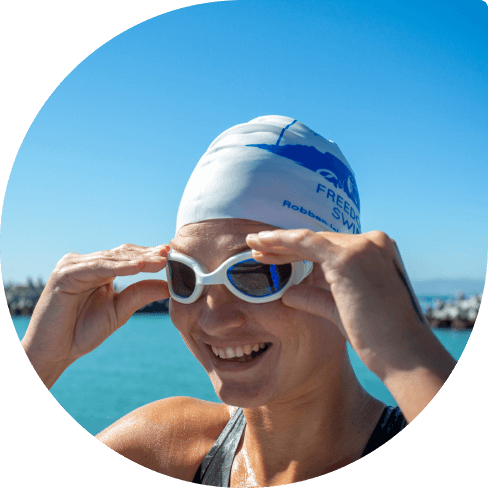 Freedom Swim, the amazing cold water swim from Robben Island to mainland Blouberg. We used to hold it annually as a one-day mass participation event. However, the Covid-19 have created a paradigm shift in our life as we adapting to a new way of life. FREEDOM IS UNSTOPPABLE, therefore, we have created the Freedom Swim Wave Series, which allows us to have Freedom Swim all year round in smaller groups of swimmers. Safer, cheaper, more predictable and you can choose your swim window to suit your busy life and training schedule. 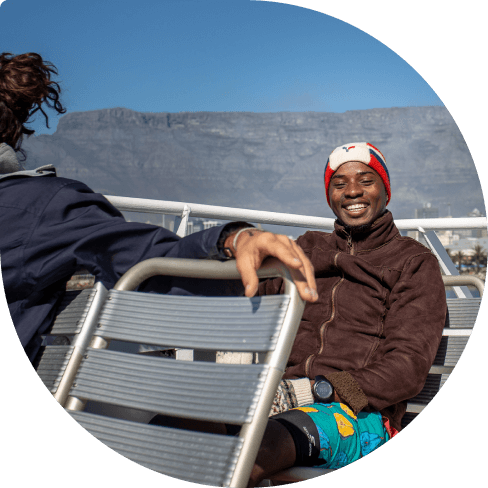 Off to Robben Island

Freedom Swim is a cold water tough swim, but it is one of the most beautiful swims in the world. You travel to Robben Island across Tabel Bay. Landing at Robben Island shores, one of the most iconic islands in the world. The view from the Island is breathtaking. And the view all the way through your swim is heartwarming with Table Mountain beauty.